​ by which all other nozzles are judged! 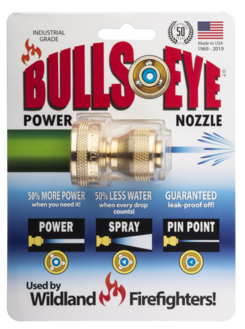 The patent process soon began and, shortly thereafter, a patent was issued and the Slip Seal Company's Adjust-a-Power Hose Nozzle, as it was called at the time, was born.

Before long firefighters and industrialists alike began to rely on the  Adjust-a-Power Hose Nozzle​ for its power, precision, and minimal water usage; and it soon became a new and essential tool in every tool box and firefighter's pocket. 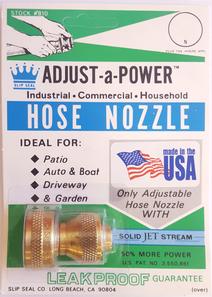 In 2008, Bullseye Enterprises purchased the  Adjust-a-Power Hose Nozzle from the Slip Seal Company.

Now, 50 years after its invention, we're proud to report this small brass nozzle is still 100%  Made in the USA to the same exacting standards, and it's still heavily relied upon in industrial and firefighting applications.

Today, this remarkable nozzle is called the

Made in the USA

The Bullseye Power Nozzle's history transports us back to the year 1969 when a gentleman by the name of William Teson was serving in the US Coast Guard.

It was after spending endless hours at sea, and learning all things related to maritime responsibilities, that the idea of designing a hose nozzle using the power of constriction to control water flow came to be.

Mr. Teson knew that a nozzle like this would become the first and only adjustable hose nozzle on the market to offer a solid jet stream, and it would offer power, precision, and quality unlike any other! Delivering 50% more power while using 50% less water, Mr. Teson determined that a revolutionary new nozzle like this would need to be made of only the highest quality brass and stainless steel ball bearings, and he decided to back it up with a leak-proof guarantee!